Transform Your Supply Chain and Logistics with Blockchain Technology

Every year, nearly 90 percent of world commerce is handled by the global shipping sector, making logistics and supply chain the true lifeblood of international trade.

However, despite having such a large impact, the logistics industry itself can be extremely complex and confusing. The sheer number of geographical points, invoices and payments, not to mention the hundreds of liaisons involved can foster a chaotic and inefficient environment.

In fact, the World Economic Forum predicts that lowering barriers to trade within the supply chain industry could increase worldwide GDP by around 5 percent and boost global trade volume by 15 percent. But now the question remains, how can the global shipping sector achieve this feat? The solution, in large part, lies in blockchain technology.

What is blockchain technology and how can it improve the transportation industry?

With the rise of Bitcoin and other cryptocurrencies, the blockchain industry has gone mainstream. However, its use in cryptocurrencies is just one of the many ways blockchain can be leveraged. But before diving into its applications for the transportation industry, let’s consider a fundamental question many of you may be asking yourselves – what is blockchain technology?

Blockchain technology is a decentralized digital ledger that keeps all information in blocks with multiple copies on computers (nodes) within the network. What’s important is that each data block is linked to the previous one, making it tamper proof and transparent. In short, blockchain is a distributed database that makes it safer and easier for organizations to do business together over the internet.

For the transportation industry specifically, blockchain can solve many challenges related to logistics and supply chain tracking, including complicated goods tracing, record keeping, lack of transparency, as well as trust issues. According to IBM, full adoption of blockchain technology in supply chain could save shipping carriers around $38 billion per year. Considering the majority of companies in the industry still rely on outdated tools and paper-based processes, there is a massive opportunity to be seized for those that lead the charge in the implementation of blockchain. 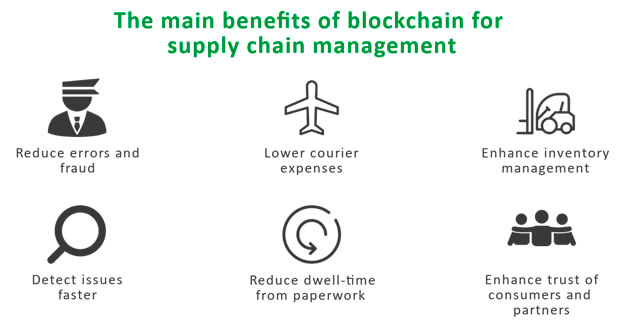 How can we apply blockchain in supply chain and logistics?

There are many examples of prominent companies from a range of industries, including retail, mining and car manufacturing that have successfully implemented blockchain into their global supply chains. These success stories can be used as a guide for supply chain and logistics companies.

Retail giant Walmart uses blockchain to track its pork products from the source in China to the thousands of store locations around the globe. Additionally, the company is piloting a special program for lettuce to ensure better traceability and build greater credibility among consumers. The mining supply chain of BHP Billiton has also seen great benefits from utilizing the technology to improve data tracking and recording with its vendors. In addition, Australian car manufacturer Tomcar takes advantage of blockchain’s capabilities to ensure seamless payment to its global suppliers.

Supply chain and logistics companies can easily leverage blockchain to greatly improve similar supply chain processes. Lack of transparency is the main concern driving the need for these organizations to implement blockchain-based supply chain management systems. Blockchain ensures that whenever goods change hands, each transaction is marked on a roadmap every step of the way from the production facility to the final point of sale. In this way, transportation companies can reduce direct costs, time delays and costly human errors, thus ensuring greater transparency and security.

Developing blockchain standards for the transportation, supply chain and logistics industries is key to ensuring efficient and effective adoption of this new technology. The Blockchain in Transport Alliance (BiTA), founded in 2017, is an industry association that promotes the use of blockchain to improve efficiency in the transportation industry. BiTA is currently comprised of nearly 500 members from over 25 countries, representing transportation, logistics and other affiliated industries. Members of the alliance work together to develop and implement industry standards, while at the same time drive adoption of the technology forward. Additionally, BiTA educates members and encourages the use of new logistics solutions and distributed ledger technology (DLT).

The success of blockchain in Bitcoin and other cryptocurrencies is currently being replicated in a range of different industries and will quickly transform supply chain and logistics. Now is the time for transportation companies like yours to take advantage of all that blockchain and other leading technologies have to offer. Partnering with an organization like TEAM International, with extensive experience in enterprise software development and tech innovation can give your organization the competitive edge it needs to become a front runner in the technology-fueled revolution the supply chain and logistics industry has embarked on. Learn more about how TEAM International helps logistics and transportation companies like yours gain a clear competitive advantage in the industry by leveraging technology and innovation.