Breaking down Blockchain with Bitcoin

Branded as the technology buzzword of the year, this new TEAM blog series will take a closer look at blockchain.

The first episode was a brief overview of what Blockchain is, and this second part will examine bitcoin; providing the most obvious and well-known example of how blockchain works and the importance of decentralization and transparency.

There are many different stories featuring bitcoin. Ranging from a lost USB stick with over 7500 bitcoins; to a wave of recent ransomware attacks demanding bitcoin that caused global havoc to huge corporations such as FedEx, Telefonica, and even to the UK’s National Health Service where hospitals were forced to shut down. One way or another, these stories have formed people’s opinions on bitcoin, but at the same time, the vast majority of people are still unaware of what bitcoin is and how it works.

Considering that in March 2010 the price of one bitcoin was $0.003, and in May later that year the first real world bitcoin transaction took place when 2 pizzas were purchased for 10000 bitcoins – the first cryptocurrency has come a very long way. There are only 21 million bitcoins, one of the factors that have led to a huge spike in price over the last year, from a price of $1,000 in February 2017, to an all time high of $19,000 in December, only for it to plummet back to $9,000 at today’s current price. This crazy rise in price has led to interest in bitcoin being split between a way to make money and the technology behind the cryptocurrency.

So what is Bitcoin and how does it work?

Invented in 2009 by an unknown person named Satoshi Nakamoto, bitcoin is the first digital currency, or cryptocurrency – a medium of exchange that uses cryptography to secure the transaction. Bitcoin operates as open-source software, on a peer-to-peer network meaning that there is no intermediary, unlike a normal financial transaction carried out via VISA or PayPal. Importantly, the currency is decentralized meaning that the system is not dependent on a central bank or administrator. Instead, it is carried out by a number of computers that run across multiple networks: the blockchain. This is one of the reasons how bitcoin differs from normal currencies such as the US Dollar or Euro, as in their case it is governments or central banks that generate and issue the money, making it top down as opposed to bottom up.

How does a transaction take place if there is no intermediary such as a bank? This is the responsibility of the miners who keep records of new transactions, verify them and collect them into groups otherwise known as blocks. For a transaction to take place, a block is created and then shared between all parties in the network, which is done roughly every ten minutes. For it to be deemed valid, it must be verified by every computer, referred to as nodes, in the bitcoin network. Once this has been completed, the block is stored as part of a chain. 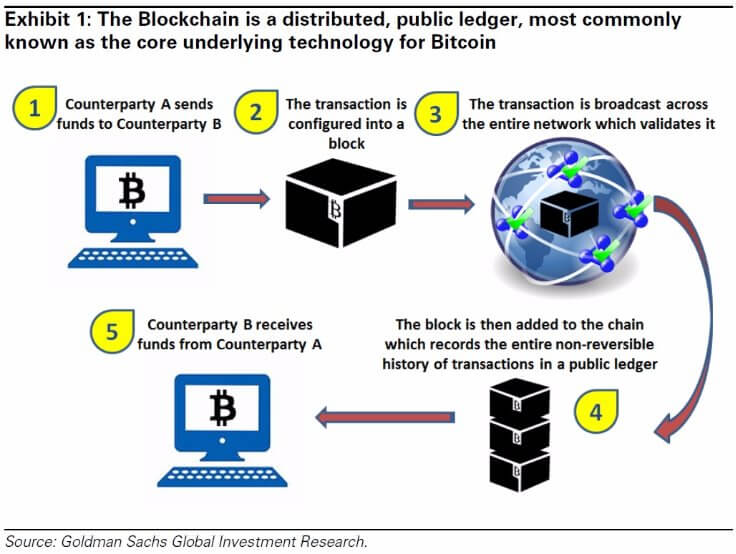 This makes hacking attacks almost impossible, as there is a transparent and indisputable record of the transaction in the network with it being stored on every computer.

Ultimately, more computer processing power means energy being used, and as the popularity of bitcoin has soared through the roof so has the amount of energy being used. So much so, that it is being estimated that mining bitcoin is more energy intensive than mining gold.

But what does all of this have to do with technology? The most significant point with bitcoin is that it provides a transparent and indisputable record of a transaction. This has the potential to remove corruption and instead replace it with accountability. For businesses this has potential to eliminate huge amount of record keeping and save money. The technology behind bitcoin – blockchain – has begun to be implemented in almost every industry ranging from government records, to gambling, and even to crowdfunding. However, for blockchain to be truly successful, a fundamental shift will be needed in these industries. The level of transformation needed will take a long time both from an IT and cultural perspective. The reason being that blockchain technology is the world’s first, viable trust less system.

TEAM has been a keen follower of blockchain and in July last year hosted an internal “Tech Talk” on the ‘Blockchain Technology Overview’. We are very much looking forward to see what new developments and innovation we can create for our customers, and what others in the industry can achieve with this technology. The next episode will examine if and how blockchain has the potential to reform some of the industries that TEAM specializes in. To follow this series, please subscribe.